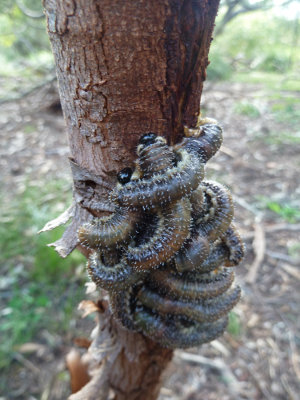 There are about 200 known species of Sawfly in Australia. The larvae of some Sawfly species are green, some black, others brown or off-white, and some are striped, and some are spotted.

The larvae of some sawfly species are so gregarious that they are often found in a knotted ball of many individuals. When disturbed, they all wriggle their tails and exude a nasty brown fluid from their mouths. This latter habit has given them the common name of "Spitfires", although they do not actually spit the fluid, just dribble it. They use the tapping of their tails to communicate with each other.

An adult wasp of different species vary in wingspan from 1 cm to 4 cm. Different species have various colour schemes, including black, white, brown, and orange, and some have the odd coloured spot and/or abdominal bands. The female of many species lays her eggs in a slit she cuts between the upper and lower skins a leaf of a food plant: an amazing feat of dexterity.

The larvae and adults of this family are quite harmless to people. They do not sting, unlike their cousins the communal wasps. Sawflies are found all over the world.